Facts about Greater Than[ + ]

A new kind of car insurance offers individual premiums per km based on driving style. Real-time measurements of how the vehicle is operated assigns a “digital DNA” to each driver – a value that takes energy efficiency and road safety into account. The technology platform gathers data and connects with the driver’s phone and the cloud to provide visualization and feedback.

The Swedish company Greater Than has developed a new approach to analysing Big Data. A self learning algorithm of the company’s design combines with a real-time measuring system to create a unique, digital driver “DNA” for every user. The artificial intelligence gives the driver feedback on driving performance and how the car is operated.

The Enerfy technology gathers data on how the vehicle is used. The information is relayed to a cloud solution for analysis, and the result is visualized in the Enerfy app. Illustration: Greater Than.

”The technology – Enerfy – is a system for real-time measuring of driving performance in terms of energy-efficiency and traffic-safety. It takes large amounts of data into account and generates a unique value for every driver. This value is used to price a new kind of insurance that we are launching together with Moderna Försäkringar”, says Liselott Johansson, CEO of Greater Than.

A new kind of auto insurance

”The number of new cars is on the rise, in Sweden and in other countries. But, paradoxically, we are using our cars less and drive fewer miles per year. This trend is likely to change how we value car ownership; while many people will continue to own their own car, leasing and car-sharing solutions are bound to be more common as well. This is an opportunity to come up with innovative insurance and financing solutions. In collaboration with Moderna Försäkringar, we have developed a new kind of auto insurance where the premium is based on the driver’s driving style and actual use of the car. Traditionally, premiums have been decided based on statistics such as age and how long the insurance owner has held a driving license”, Liselott Johansson says.

”Enerfy data allows the driver to get information on the insurance cost of every single journey right in his smartphone. Since energy efficient driving and traffic safety are closely related, this insurance concept contributes to reduced carbon dioxide emissions. We made an assessment together with WWF and the Swedish Energy Agency, and in a global perspective, we are talking about potential savings of 100 million tonnes of CO2 from cars built after 2001”, Liselott Johansson says.

According to Greater Than and Moderna Försäkringar, the insurance benefits drivers that use their cars sparingly, such as big city residents, families with another car, and young people. The basic insurance also covers damages to the car when it is parked, and the driving premium is only charged when the car is actually used.

”Most car owners want to act responsibly in traffic and drive with safety in mind. Our solution visualizes driving behaviour and a smarter driving style is rewarded with cheaper insurance. As a side effect, traffic gets safer and considerate driving in general is encouraged”, says Torbjörn Annerfors, Head of Strategy and Transformation, Moderna Försäkringar.

An ODB reader collects data every time the car is used. Photo: Greater Than.

”Enerfy Driving was launched early in 2015. The results have been positive: less impact on the environment, safer driving, fuel savings, and better insight for drivers into their car and how they use it”, Liselott Johansson says.

”The technology is based on a plugin, an ODB reader, that reads data from the car and transmits it to a cloud solution for analysis. Information is then sent back to the driver’s smartphone, and visualized through the Enerfy app. The cloud solution consists of large amounts of stored data, databases with best practice-profiles, self learning algorithms, artificial intelligence and modern profiling methods. The algorithm of our own design creates kind of an eco system of services to assist you, and calculates your individual digital profile.”

”Enerfy Driving can be used everywhere in the world and regardless of what kind of car you have. The purpose is to inspire smarter driving to help you get the most out of your car. The product includes an automatic driving log, statistics, journey mapping and timing and scoring. Suggestions on how to reduce fuel consumption are offered based on distance and speed. Enerfy Driving essentially measures how safely and efficiently you are driving compared to others”, Liselott Johansson says. 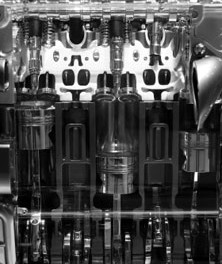