Rubber manufacturing is like baking bread. Rubber polymers, plasticizers, oils, fillers, carbon fillers, accelerators and other chemical ingredients are all mixed in a blender and then kneaded into a mixture in a rolling mill.

But a resilient and elastic rubber product only becomes stiff after the polymers are cross-linked at high temperatures in an oven. The process is called vulcanization and can be compared to the baking of bread.

By varying the recipe, rubber products with different properties can be manufactured – shoe soles, tires and tennis balls, and technologically advanced polymers like the kind used in the aerospace industry, and on oilrigs.

In the article ‘Patents for organic rubber,’  we asked ourselves where do all the old tires go?

An estimated 250 million tires are discarded every year in Europe, making it a waste problem of significant proportion. Although the rubber industry has more than 150 years of experience, it has still not found the ‘perfect’ disposal and recycling method for rubber products. There remains a number of unresolved methodological problems.

Let us now return to baking bread, this time backwards. Imagine that you could put a ready-baked bun in the oven again, and out come the ingredients. The process is called ‘pyrolysis’ and has long been used to recycle tires and other rubber products.

But the conventional recycling method has a number of technical and safety deficiencies.

Inventor Bengt-Sture Ershag has revolutionized the ‘pyrolysis’ process and commercialized it in his company Scandinavian Enviro Systems Inc, or SES.

Pyrolysis (Carbonizing by Forced Convention, or CFC) is based on the principle that a material is heated without oxygen in a reactor as it decomposes, which leads to the creation of gases, liquids and solid residue. The process of separation was used already back in the 1700s to produce coke and coal. 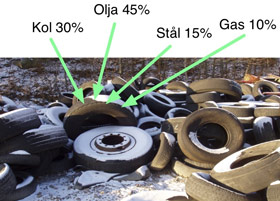 One would think that a 300 year-old technique would be fully developed today, but pyrolysis is by no means free of challenges.

Bengt-Sture Ershag’s ‘closed’ pyrolysis process for recycling rubber tires contains a number of improvements over previous methods that relate to efficiency, safety and economy. For example, the ‘closed’ process minimizes the risk of oxygen leaking into the equipment, and thus explosions.

With further improvements, pyrolysis could be a viable technique as it can be performed around the clock and be monitored automatically thus reducing the need for staffing.

One important improvement is in energy efficiency, where the energy generation of the startup phase is reused in the subsequent process steps.

When the tires are heated, a hot gas is released into the closed reactor and the temperature quickly rises to 600 degrees. And when new rubber is added, it melts in less than one second, resulting in homogenous fractions of coal, steel and oil. Four to five tons of rubber waste can be batch processed in this fashion, amounting to almost 30 tons per day. This is a huge advantage from a process economic point of view.

Finally, Ershag’s method of adding energy to the mix reduces the risk that rubber sticks to the reactor walls, thus reducing cleaning and maintenance costs and making it easier to switch to another type of rubber material for the next recovery stage.

A variety of useful products from discarded tires 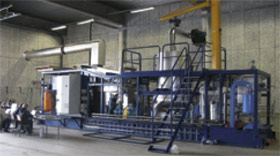 The reactor, filled with finely shredded tires, is then emptied of air. A heat exchanger blows hot gas into the mix to distribute heat energy to start the pyrolysis process.

“Our pyrolysis process is profitable,” says Ola Ekman, CEO of Scandinavian Enviro Systems. “In addition to taking care of the gas and recycling it to heat the process, we take care of the oil used to soften the tires. The oil can be distilled and reused for different end products. The tires also contain other materials that are interesting from a recycling point of view. Steel, for instance, can be used to reinforce new tires, and carbon black, a material produced by the incomplete combustion of heavy petroleum products, can be used as fillers to make new tires black.”

“In the pyrolysis process, carbon black is separated from steel using a magnet and can be treated in a mill dividing it into even smaller pieces. The result is a product that can be used for new tires, as ink, or for coloring black plastic parts,” continues Ekman.

“Recycling of carbon black is not something that is accepted by the rubber industry today. But the tests we have performed at laboratories in the U.S., including one in Acron, Ohio, the rubber capital of the U.S., show that the quality of our end product is good enough. Our process could revolutionize the rubber tire industry,” says Ekman.

As with most innovations, a long time elapses between the original idea and large-scale industrial processes.

Pyrolysis was first used in 1994, but it is only now that laboratory tests have resulted in a full-scale production.

A number of countries and companies have shown great interest in the process. It is currently being tested at a plant in Gothenburg, Sweden.

In late 2011, this plant, with a capacity to recycle 10,000 tons of tires, will be put into operation. It is not likely that there will be a shortage of raw materials. Sweden produces only 80,000 tires per year.

Pyrolysis can also be used to recycle the components of electronic waste, cars and scrapped wings from wind turbines, for example. The method also works for recycling biological materials like chicken droppings to obtain the elements of biogas, bio-oil and ‘biochar,’ a nutrient-rich soil conditioner created by the pyrolysis of biomass. 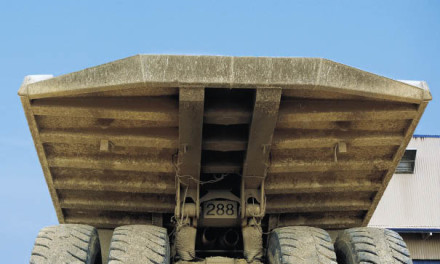