Requirements for the performance and security of materials can be extremely high, such as with nuclear plants and military installations.

The cables used in such applications must be strong, durable and withstand pressures in terms of high temperatures and radioactivity. They should also have good environmental and health properties.

Important components that contribute to a cable’s proper functionality include plastic and rubber that contain halogens like chlorine, bromine and fluorine.

But such polymers give off toxic fumes when incinerated and certain flame retardants are questionable from a health and environmental standpoint, hence the interest in other solutions.

With a technique called ‘cross-linking,’ cables can be strong, durable and thin, yet produce a different kind of flame.

Swedish company Irradose has specialized in the production of high performance cables that operate in harsh environments. Their plant in Tierp, Sweden is unique in Scandinavia.

The technology behind cross-linking means that the plastic’s natural molecular chains are destroyed. The plastic strives to recreate the molecular chains and in the process creates new structures in the material to make it stronger.

The cross-linked material better withstands high temperatures while making it more resistant to harsh chemicals and mechanical stress. From a lifecycle perspective, this new material uses less material in the cables, making them thinner, and more easily manufactured. This creates both environmental and safety benefits.

“The cross-linking can be done in several ways, either with chemicals or by blasting the cables with electrons,” says Hans Forsgren, CEO of Irradose. “The radiation technique is reminiscent of an X-ray facility. The cables pass through two accelerators generating electron radiation, and new bonds are formed between the molecular chains in the plastic. We can irradiate several hundred meters of wire per minute.”

The facility is built like a bunker with 1.3-meter walls and ceilings. Several accelerators allow more efficient and better quality radiation. The radiation is one million volts, but consumes only 100 kilowatt per hour.

“The cross-linked products are easier to work with because they weigh 30 percent less than the old cables to be replaced. Electron radiation also means that we can use cheaper materials in parts of the production and get higher performance,” says Forsgren.

“Our method to handle polymers has less of a climate effect than other methods that use considerable more energy.” 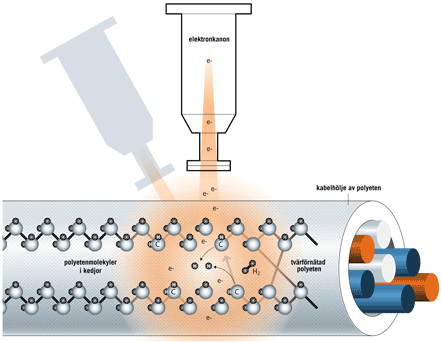 With the Irradose method, irradiated cable is wrapped around dual electron guns. These electrons smash polyethylene chains. In the process, they release hydrogen. When the molecules are reunited cross-connections are created between the molecular chains. The cable sheath is now cross-linked and has also gotten stronger.

The use of high-performance cable products is wide and it’s not limited to nuclear power and defense markets. Cross-linked products are used in the transport sector and in the oil industry in offshore operations where standards are extra tough. Another interesting application is in the wiring of photovoltaic systems. This means that the cables have to be very durable and withstand at least 25 years of use in a demanding environment.

Irradose was started in 2009, and since then it has become much easier for its customer Habia to utilize the electron irradiation technology.

Irradose’s and Habia’s factory in Söderfors are only 20 kilometers apart and daily transports occur between the plants.

Before, cables were sent to Germany by truck to be irradiated and the carbon dioxide emissions from the transportation amounted to about 14 tons per month.

Now the Tierp to Söderfors transport produces less than one ton of emissions. 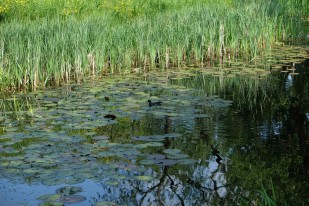 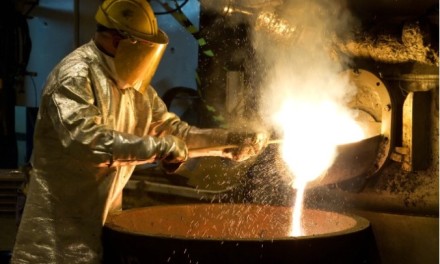 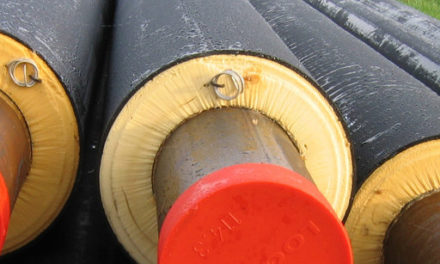 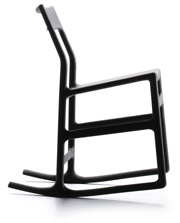