The study of energy is called thermodynamics, and two of the main issues in the field are useful to know:

Energy efficiency, energy security and climate change are vital issues. This is where science meets everyday life, both in the short and long term. The quest for sustainable energy solutions is intense and companies, researchers and innovators are tackling the problem with a wide variety of approaches, as reflected in the volume of environmental articles appearing regularly in the press.

In Sweden, housing accounts for more than one-third of national energy consumption, the bulk of which is for heating, cooking, lighting and powering household appliances. In offices, hotels and industrial premises, cooling systems and ventilation account for the lion’s share of total energy usage.

During the summer there is a surplus of heat, and in many large buildings energy is used to lower inside temperatures. During the winter the opposite is true. So saving surplus summer energy for the cold season would appear to be an intelligent exploitation of the thermodynamic rules of the game.

Energy storage in a borehole 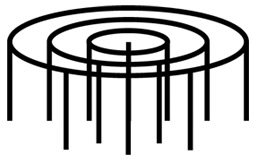 Nowadays it is profitable to invest in pumps that draw energy from air, land, rivers or mountains. Since the heat pump is a central part of the function of an energy storage unit, this means that energy stocks have become commercially viable as well.

Energy storage systems based on the BTES principle include a number of boreholes, which, according to SEEC’s approach, are drilled in concentric rings. The number of boreholes and the depth of the drilling depend on how much energy needs to be stored.

When a building is cooled, heat is wasted when it is led away with fans. A better option is to direct the waste heat to an energy storage unit where it warms the ground around the boreholes. If the cooling load is large enough, the waste heat that’s generated will be sufficient to warm up the building in the winter. If the waste heat is insufficient for winter needs, the energy storage can be complemented with buried collectors, which consist of underground tubes filled with liquid. Solar energy heats up the collectors and the heat is led down to the energy stocks.

During the winter, heat from the stocks is led through heat pumps for building heating. If the energy storage is properly dimensioned, no other energy source is needed to heat the building. In a warm climate, energy storage can be used in the reverse way to store surplus cooling to keep the building cool during the summer.

”Thermal energy storage is in itself a great solution,” says Andrew Anderson, CEO of SEEC. ”The individual components are based on proven technology, and storage offers large economic and environmental benefits. In existing installations, the energy that one usually had to pay for dropped by 70 to 90 percent.”

One of the basic principles of thermal energy storage is to achieve energy balance in the stock, i.e., that it adds as much energy as it uses. The temperature in the stock can average 7°C, but over a year it oscillates from 4° to 10°. The temperature variation is caused by the energy that is added or unloaded from storage. By gradually adding a little more energy than is taken out, the efficiency of the energy system gradually increases.

“SEEC has focused on minimizing energy loss, resulting in a number of advantages. Among other things, we can easily build up a temperature cushion in the stock to increase the efficiency of the whole system. This yields a large positive effect on our customers’ operating costs,” Anderson concludes .

SEEC’s energy stocks use several different methods for monitoring and control: the temperature is measured in the boreholes, supply and use of energy are recorded and the total energy of the stock is continuously followed. The monitoring and control of energy storage interacts with heat pumps and other equipment. In addition, control systems are based on open technology and can be controlled remotely over the Internet.

In Katrineholm, a soccer field is heated in the winter with the waste heat from refrigeration compressors at a nearby hockey rink. The energy from the compressors is stored in an energy storage unit from SEEC. Via a heat pump, the excess heat is led to heating coils under the soccer field to allow year-round playing. In the summer, the soccer field becomes a solar collector where the heating cables are used to heat up the energy storage, making the heat pumps even more efficient and further improving operating finances.
Article published in May 2011