Zygomycetes are microfungi that decompose dead plant material. They grow well on sidestreams from forest and agricultural industry, providing a nutritious and environment-friendly biomass suitable as fish feed.

The Gothenburg-based biotech company Cewatech has developed technology to grow edible zygomycetes microfungi in sidestreams from paper pulp or starch production. The nutrient-rich product can be used as fish feed, and is a good replacement for fish meal in fish aquaculture.

”The first application of the technology is using waste lye from Nordic Paper’s pulp mill in Säffle. Fish feed produced from such feedstocks would increase growth rate of fish, improve the environment, generate revenue for paper mills and save wild catch which would otherwise go into fish meal production”, says Lars Edebo, Head of Research and Development at Cewatech.

The total production of fish in the world is approximately 158 million tonnes per year, and we eat on average 19 kg per year (more in Asia). More than 42 percent of the fish production is farmed in aquaculture. Since the 1950s, there has been an eightfold increase in the amount of farmed fish. This makes aquaculture the fastest growing segment of the food industry. According to FAO (the Food and Agriculture Organization of the United Nations), fish farming will overtake commercial fishing in production volume within the coming decade. It is likely that aquaculture will remain one of the most important ways to supply the growing world population with high quality protein.

In Sweden, fish farming has been on the rise since the 1980s but growth has slowed down in later years. Current production is approximately 12 000 tonnes annually (2013). Rainbow trout (Oncorhynchus mykis) makes up more than 80 percent of the volume.

Large scale fish farming comes with challenges, both for the farmer and the environment. The feed for the cultures is often of marine origin – fish meal and fish oil. This practice is costly and environmentally dubious, and there are widespread efforts to find alternative sources of fat and protein. One possible fish meal substitute is nitrogen-rich oil crops, but this option has drawbacks related to the feed’s composition and the way it is produced. Feeds of animal origin can also be used, both aquatic and terrestrial. The arctic crustacean krill is one such candidate, but supply is limited and cost is high.

It would be better if aquaculture feed did not compete directly with food resources. This is what makes Cewatech’s technology so interesting to the aquaculture industry, since the microfungi is grown purely on waste streams, turning residue into valuable resource.

”We are focusing on waste and recycling, primarily. We can use agricultural and paper pulp sidestreams to grow edible microfungi (zygomycetes). Waste streams from the food industry is another possible feedstock. The high content of protein, aminosugar and vitamins makes the fungus biomass ideal to use as ingredient in commercial aquaculture fish feed. The content of amino acids and aminosugars is almost identical to the crustaceans which are a basic feed for predatory fish fry”, Lars Edebo says.

”Zygomycetes can also be used as food. Since hundreds of years zygomycetes have been eaten by millions of people in East Asia, in the form of tempe. Tempe is like a Camembert cheese with the  fungus growing on crushed soybeans instead of whey”.

According to Lars, zygomycetes have attractive properties as fish feed and provides environmental advantage:

”At Nordic Paper’s paper mill in Säffle, the fungus is grown on sugar-rich sulfite waste liquor. The sulfite residue would otherwise be incinerated to recover energy, but producing fish feed is more cost efficient. The pilot studies have shown that the method is efficient and stable. The biomass has been tested by the third largest fish feed producer in the world, as a replacement for fishmeal in feed to rainbow trout. The specific growth rate improved. The feed is also excellent for salmon, char and bass”, Lars says.

”The pilot facility has given us a better understanding of the process, and we are now able to deal with problems such as foaming, pH fluctuations and contamination. And we can do the cultivation without having to sterilize the feedstock, which saves a lot of energy. The fungus biomass is easily harvested, drained and dried in the existing facility. We can use waste heat, and our production costs are competitive. Large-scale production would pose additional challenges regarding cultivation, harvesting, washing and drying, and we are working together with Karlstad university to address these issues”.

Lars Edebo used to be head of the Clinical Microbiological Laboratory at the Sahlgrenska University Hospital, with aggressive fungal infections as his field of expertise. He is working together with his son, the surgeon Anders Edebo, to develop medical applications to harness the positive properties of the fungus.

”The fungus biomass can also be refined into chitosan-rich cell wall material (CWM), which contains positive charges and has antibacterial properties. We will try to use this for wound treatment and to prevent the dreaded multiresistant bacteria (MRSA) and ESBL-producing enterobacteriaceae from spreading in medical and elderly care. There is also interest in testing it as an adjuvant (vaccine efficacy enhancer) for mucosal vaccination, and as a sustained release drug delivery system. When CWM is gathered, the other components of the biomass can still be used in fish feed, improving production economy and minimizing emissions”, Lars Edebo says. 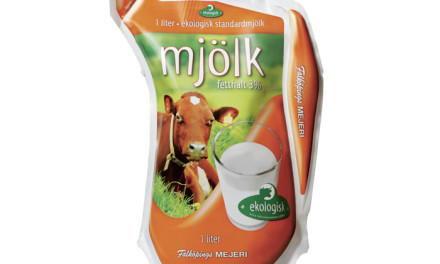